Our Novel Approach in Cancer Research Beyond Chemotherapy

Our cutting-edge R&D is concentrated on eradicating the ‘incurable’ and ‘undrugable’ diseases of our time, commencing with the two most elusive mechanisms of cancer: Cancer Stem Cells (CSC) and KRAS genetic mutations.  Our recent breakthrough discoveries have led to a promising anti-viral therapeutic for SARS-CoV-2 infections and Covid-19. Learn more.

The biggest challenge in current therapeutics of chemo drugs is the inability to kill cancer stem cells (CSCs) which are capable of self-renewal, proliferation and differentiation. Most studies reported that the existing chemo drugs have limited penetration to the CSCs due to their hypoxic microenvironment and distant location away from the vasculature that retards the efficacy of the drugs. The secondary challenge is that the surviving CSCs lead to relapse, metastasis and drug resistance. Thirdly, all conventional drugs in the market kill both normal cells as well as cancer cells. None kill the elusive cancer stem cells.

Cancer stem cells (CSCs) have been demonstrated in a variety of tumors and are thought to act as a clonogenic core for the genesis of new tumor growth. This small subpopulation of cancer cells has been proposed to help drive tumorigenesis, metastasis, recurrence and conventional therapy resistance.

The figure below illustrates aberrant signal transduction pathways in CSCs which play important roles in self-renewal, drug resistance, tumor recurrence and distant metastasis. The signaling pathways Notch, Wnt and Hedgehog signaling, and downstream effectors including the transcription factors Beta-catenin (Beta-cat), signal transducer and activator of transcription 3 (STAT3), and Nanog, play key roles of CSC properties. After interaction with xCT, a CD44 variant (CD44v) has enhanced capacity for glutathione synthesis and defense against reactive oxygen species (ROS). Due to this aberrant status, CSCs acquire the unique phenotype. 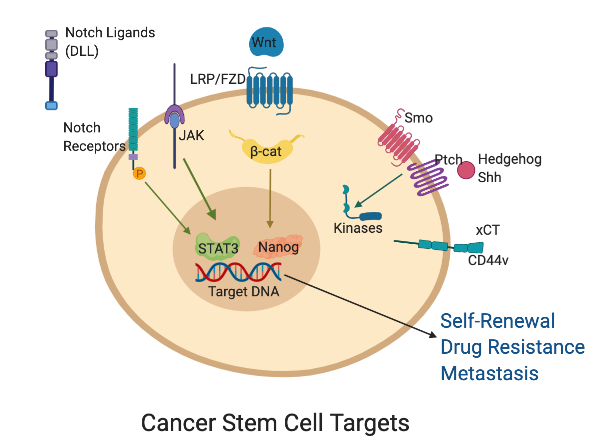 KRAS is one of the most frequently mutated oncogenes in cancer, being a potent initiator of tumorigenesis, a strong inductor of malignancy, and a predictive biomarker of response to therapy. In addition to holding this distinction, unsuccessful attempts to target this protein have led to the characterization of RAS as ‘undruggable’. RAS signaling networks are built at the membrane of cells, bridging extracellular cues into cellular events, such as cell growth, proliferation, differentiation, and survival, having a decisive role in the transition of healthy cells to cancer. All these findings have led the scientific community to exploit RAS or its downstream effectors as therapeutic targets, hoping to impair tumor growth and survival. However, no effective KRAS directed signaling inhibition has been successfully achieved.

Mutations that render KRAS constitutively active will lead to uncontrolled cell growth and cancer. Despite aggressive efforts in recent years, there are no drugs on the market that directly target KRAS and inhibit its aberrant functions.  Agastiya Biotech is actively engineering small molecules that have the potential to destroy mutated oncogenes while leaving healthy, normal genes unaffected. 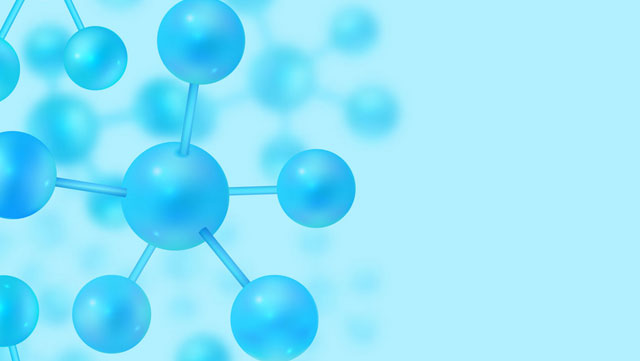 Nature is the ultimate evolutionary algorithm. By decoding an ancient tradition, we are making new discoveries in the therapeutic potential of plant-derived medicine. We believe the power of this modalitiy will lead to the next, blockbuster (non-invasive) drug. 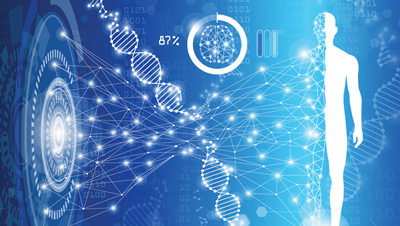